For Memorial Day: A Letter Home

Posted by Jojo on May 26, 2014
Posted in: Uncategorized. Leave a comment 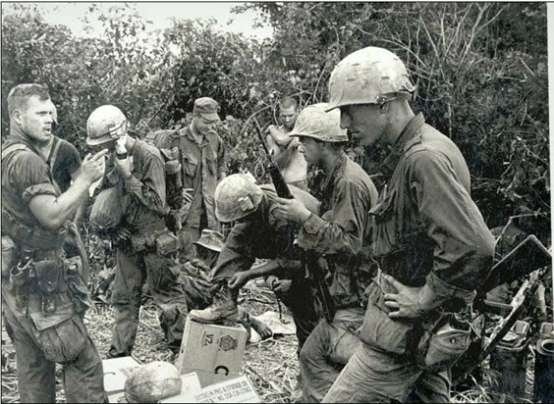 When going through a few of my father’s things after he passed away, I found a Xeroxed copy of a letter addressed to a co-worker at the office my father worked in for the City of Saginaw. It was from a young man named John Castillo, who had worked in my Dad’s office while studying in graduate school. John was later drafted into the Marine Corps and served with the First Battalion First Marines in Vietnam. Here’s what he wrote:

Received your letter Thursday after we came out of the field.

I’m now the squad radio man, have been for a month. I had to call in my first MEDIVAC Sunday. We were on patrol when he got hit from three sides. they had a .30 caliber in front of us, a BAR and auto carbines on our left flank, and auto carbines on our right flank. We were lucky, we only had one man hit, he got it in the head. He lost an eye, but he’ll be okay. The second man back was lucky, he got a hole in his canteen and the third man back had a round glance off his helmet. We were on our way to help another squad who got ambushed, they had the VC pinned down.They got artillery support.

I was rather nervous, I would have felt better shooting back, but I had to call in for the chopper and help. My squad leader gave me cover while I was on the radio. It’s time like that that I wonder if I’ll ever make it back.

We came back to Battalion Monday. The lead truck hit a 500 pound bomb. They had four killed and six wounded. Our platoon had to set up security that night and the next day (Tuesday). They left our squad out there, and he got hit by sniper fire Monday night. I was lying down and a tracer round came over my head about a foot away. That’s as close as I’ve come to getting hit.

I might get promoted next month. I don’t mean to brag but the platoon radio man said I did a real good job on the MEDIVAC so he said he’d see about getting me promoted.

We’re going on an operation in a few hours. It’s gong to be for three or four days.

We went on a sweep yesterday and we got one VC. We had one casualty. He hit a (unreadable) grenade. Broke both his legs, and he caught some fragments. He’s going home. He really got lucky.

I hate to cut it short, but I got to get my gear ready. Give my regards to Deborah, Kelly and the gang at the office.

It was his last letter home.

A month later, On October 11, 1967, Castillo’s squad was airlifted into the Hai Lang Forest south of Quang Tri City as part of Operation MEDINA. MEDINA was aimed at disrupting operations by the 5th and 6th NVA Regiments. The 1st Battalion, 3rd Marines also were involved, conducting a sharp fight with the NVA on 11 October.
The 1/1 Marines had two significant engagements. On 12 October, Charlie 1/1 engaged 2 or 3 NVA companies; while the Marines lost nine men the NVA left 40 bodies on the battlefield. On 14 October the 1/1 Marines had two separate engagements, losing four men. The battalion’s final loss was one man from Delta 1/1 on 15 October – Pfc David Gronau – when 1/1 was withdrawn. Fourteen Marines, including a combat photographer attached to Charlie 1/1, died during 1/1’s operations in the Hai Lang Forest: